Does My Portfolio Fit Me?

By utilizing Riskalyze,* Amplio Wealth Management educates and empowers investors to be invested within the bounds of their tolerance for risk.

The emotions fear and greed are two of the greatest threats to individual wealth!

Many people are invested outside of their risk tolerance. They typically or usually miss the market upswings because of fear of a pull back. When they finally decide all is clear, the market inevitably pulls back and they sell out and lock in significant losses. They then start the cycle again waiting until the market “feels safe” to buy back in.

We believe this poses the greatest threat to individual wealth, and we’re empowering investors to end that cycle. 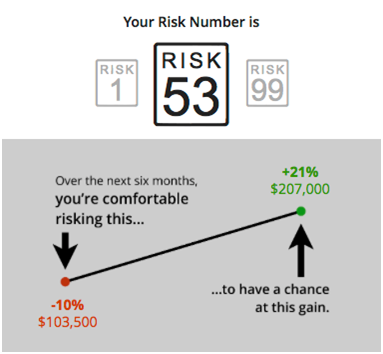 By clicking on the “Does My Portfolio Fit Me” link, you will answer a few basic financial questions such as your financial goals, targeted retirement date and loss vs. return expectations. Afterwards, you will immediately see a chart similar to the example on the left.

We will then contact you, via your preferred method (phone or email), and discuss your Risk Number and your current portfolio. No personally identifiable information is required and we never sell or disclose your email address.

Your Risk Number provided is on a scale of 1 to 99, with higher numbers indicating higher risk tolerance. The risk range shown describes the comfort zone for your investments. Over the next six months, it represents a hypothetical target that you would prefer to keep your investments within. Using the example shown on the left, this would mean the investor would be comfortable risking a loss of -10% or $-103,500 in exchange for the chance of making a gain of +21% or $207,000. There is no guarantee any investments would perform within the range.

IMPORTANT: The projections or other information generated by Riskalyze regarding the likelihood of various investment outcomes are hypothetical in nature, do not reflect actual investment results and are not guarantees of future results.

End the guessing game today and find out.

Content in this material is for general information only and not intended to provide specific advice or recommendations for any individual. Scenarios illustrated are hypothetical and not representative of any specific investment. Individual results will vary. Investing is subject to risk which may involve loss of principal. Past performance is no guarantee of future results.

* Riskalyze is a unique and patented Risk Fingerprint technology built on the academic framework called Prospect Theory ** which won the Nobel Prize for Economics in 2002.

** Prospect theory is a behavioral economic theory that describes the way people choose between probabilistic alternatives that involve risk, where the probabilities of outcomes are known. The theory states that people make decisions based on the potential value of losses and gains rather than the final outcome, and that people evaluate these losses and gains using certain heuristics. The model is descriptive: it tries to model real-life choices, rather than optimal decisions. The theory was developed by Daniel Kahneman and Amos Tversky in 1979 as a psychologically more accurate description of decision making, comparing to the expected utility theory. In the original formulation the term prospect referred to a lottery.

The paper “Prospect Theory: An Analysis of Decision under Risk”[1] has been called a “seminal paper in behavioral economics”.[2]

Riskalyze is a separate entity from Amplio Wealth Management and LPL Financial.